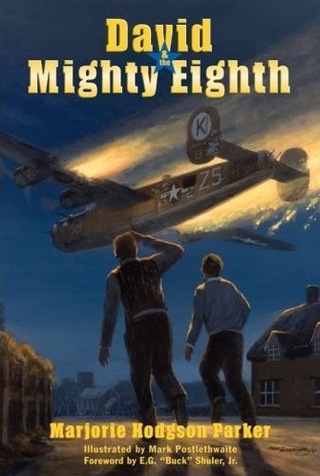 David and the Mighty Eighth

A young British boy, David Freeman, is caught in the cruelty of World War II from the time he is 10 until he is 15 years old. Evacuated from his war-torn London home during the Blitz, devastated by the news that his father, a Royal Air Force pilot, is missing in action, and determined to become a man, David seeks what it takes to have courage.

Based on a true story, this historical fiction recounts David’s adventures and the forging of his friendship with an American pilot, Tex, and his crew. The friendly airmen with the Eighth Air Force, “The Mighty Eighth,” give David hope when Hitler’s Nazis seem unstoppable.

Living on his grandparents’ farm in East Anglia, where he and his sister have been sent for protection, David struggles with the grief and hard life of wartime, while striving to win the respect of his grandfather. This coming-of-age account teaches that despite the horrors of war, good can be found in the worst of times. David and the Mighty Eighth confirms the importance of faith, family and freedom, and is a testimony to the resilience of the human spirit.

“Marjorie Parker has proved to be a masterful storyteller in producing this gripping story set in World War II England. David and the Mighty Eighth is a ‘must read’ for young people, especially those who have a thirst to understand what English families endured during the war. I commend it to all readers, young and old alike.” -- E.G. “Buck” Shuler, Jr., Lt. General, USAF, Retired, Former Commander of the Eighth Air Force

“There are few authentic novels written about children during the war and this volume will appeal to children and adults alike. Author Marjorie Parker tells the tale of David Freeman who grew up in the shadows of the 8th Air Force airbases in East Anglia during WWII. …this fine book gives the reader a close-up of a wartime British family and its relationship to the Mighty Eighth.” – 8th Air Force News Book Reviews

“WWII veterans and everyone dedicated to honoring them and the values of their generation will delight in buying this book for the young people in their lives. … it is a touching vignette of Americans as goodwill ambassadors .… For the younger generations, David and the Mighty Eighth is an open door to a world so intriguing they will be compelled to enter and ask, ‘Hey, what was this all about?’ And well they need to know.” – Kelsey McMillan, 389th Bomb Group Newsletter

Jellyfish Still Can't Swim
A sequel to the popular "Jellyfish Can't Swim," these devotionals and charming illustrations reveal more secrets of God's creatures that make them good teachers, entertaining and teaching young readers about God's wonders in the animal kingdom and in their own lives.

THE Child is Born
For church children's choirs, this delightful, energetic Christmas musical presentation tells the tale of stable animals who are transformed by the love of the Babe in the manger, as told by a Tortoise and two magpies. See THE Child is Born website for more information.

Shaken to the Core (And Finding God's Strength)
Devotionals offering hope and comfort for troubled times.

Assault, the Crippled Champion
Account of King Ranch’s Triple Crown champion who “ran on three hooves and a heart.” Now available as an E-book.

David and the Mighty Eighth
In World War II, a British boy learns courage from an 8th Air Force crew.